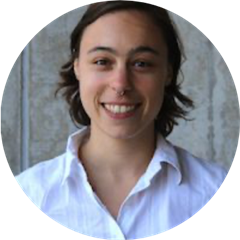 Class of 2008
“In the sixth grade, we had a technology class devoted to creating a foam car with blinking lights. I recall drawing the schematics, cutting out the shapes, and soldering the components on the circuit board. As a result of this class, alongside Mme Lepert's courses, my curiosity for learning science grew. Ever since then, I have taken advantage of every opportunity to continue pursuing science.” Alumna Geneviève “Genny” Gish Allouche fondly recalls the influence INTL had on her future pursuits.

After graduating from ISTP in 2004, Genny attended the French American High School in San Francisco, where she was actively involved in extracurricular activities. She joined the women’s basketball team, played the harpsichord in the music ensemble accompanying the opera, Les Pygmees, and participated in the Student Congress as part of the Speech and Debate Team. Genny also took part in a science excursion to Brest, France, with her biology teacher, where she was introduced to marine sciences, the fishing industry, and the many cultural sites of Bretagne. She maintained her strong study ethics picked up during her time at INTL, and completed the French Baccalaureate Section S OIB* upon her graduation.

Genny then attended Bryn Mawr College in Pennsylvania to pursue a Bachelor of Arts in Physics with a minor in French. A few of her coursework included multivariable calculus, electromagnetism, French literature, and chorale. Towards the end of her college career, she took an internship at Brookhaven National Laboratory in Long Island, NY, and also served as president of the Society of Physics Students at Bryn Mawr.


Genny ascribes her ability to manage coursework and extracurricular activities to, “using a planner to keep track of my goals for the week and the day. I only list two to three items, which need to be accomplished for the day. Setting aside an hour for physical activity most days has allowed me to focus and be more productive.” The importance of balancing different aspects of one’s life--intellectual, physical, and emotional--is one of the attributes of the IB Learner Profile that INTL hopes its students achieve.

In 2012, Genny was awarded the Fellowship Cash Award through the University of Arizona (UA), which fully funded her first year in a Masters of Science and PhD dual degree program. “At the end of my undergraduate studies, I decided to pursue a degree in optics. The University of Arizona has one of the top programs in the country, and since they were the only ones who accepted me into a Masters/PhD program with funding, I decided to take it. I was also interested in their program because they emphasize interdisciplinary work and offer a wide range of courses. I would like to finish my PhD in the future or maybe pursue a Masters in computer science.”

Genny is now finishing her Masters in Optical Sciences, and completing her research primarily in computational optics. Her thesis involves developing and verifying an RCWA model in Matlab. She is beginning her job search and seeking roles to develop and improve software programming for optical engineers. “I have been searching primarily for optical engineering roles, but I have also come across data analyst roles. Optical engineering is very broad. It can range from designing optical systems, such as cameras and telescopes, to analyzing images. Optics is used in nearly every field. I would like to ideally create tools (in Matlab or Python) to automate processes within optical systems, or for parsing through data.”

During her time at UA, Genny also had the opportunity to exercise her French language. “When I joined a research group in graduate school, I recognized one of the students speaking English with a French accent. I decided to ask whether or not he spoke French. Once we realized we had another language in common, I asked him further about the program linking the University of Arizona's Optics department and l'Institut d'Optique Graduate School. Overall, the French language has allowed me to become acquainted with a tight-knit group of graduate students.”

When asked how INTL influenced her life and interests, Genny says, “I have become perceptive to other cultures and obsessed with learning languages, ranging from musical expression to programming languages. INTL has not only offered me a multilingual education, but also developed my excitement to learn new subjects.”


*Option Internationale du Baccalauréat (OIB) is the French general baccalaureate with an additional international option. Students preparing the OIB are required to study in international sections for the last two years of high school. Section S is one of three academic concentrations, or séries, which corresponds to Mathematics and Experimental Sciences. Source: The College Board
Back