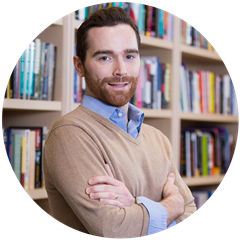 2021 Rising Star Award Winner
Founder, GSBuilds
This year’s Alumni Rising Star, Matthew Colford, is an incredible example of how a bilingual international education imparts both a passion for learning about the world and the skills to work to change the world for the better.
In his young career, Matthew Colford (8th Grade Class of 2006) has already built an impressive resume centered around service both here and abroad. After graduating from Silicon Valley International School*(INTL), Matthew went on to attend Stanford University, where he studied Political Science and Arabic, inspired by an interest in Francophone North Africa that was first kindled in an INTL classroom.
Fluent in both French and Arabic, Matthew then had the opportunity to serve in the U.S. Embassy in Morocco. While there, conducting business everyday in French and Arabic, he says, “I found myself reflecting a lot on my time at INTL, and my experiences being exposed to different cultures and trying to build community and understanding across cultures – growing up in an American family while receiving a French language education, I felt those lessons very acutely. I was able to bring this mindset with me in my work in foreign affairs. In Morocco, because of my perfect accent, people often assumed I was from the French Embassy, which was fun.”
After his service in Morocco, in 2012 Matthew had the opportunity to serve in the White House for the Obama Administration, where he worked in the Office of Intergovernmental Affairs. In 2014, Matthew again returned to the State Department, working as Special Assistant and Policy Advisor to the U.S. Ambassador to the U.N. Samantha Power. During his service, he focused on Latin American policy, especially Venezuela, Haiti, and the initiative to reestablish diplomatic relations with Cuba.
After his service with the State Department, Matthew decided he wanted to return to Palo Alto from Washington, D.C. (to join his wife who was in graduate school at Stanford). Back home, Matthew worked as a Partner in Policy and Regulatory affairs at Andreessen Horowitz, and as a research assistant at the Hoover Institute in the Office of Condoleeza Rice. In 2018, he was named a Knight-Hennessy Scholar, a program which seeks to prepare a new generation of leaders to develop creative solutions to the world’s most complex problems, a program that funded his next educational endeavor – pursuing a JD at Stanford Law School.
Today, Matthew is working for a local startup, and just welcomed a newborn son, James. After all his adventures and service, Matthew has still found the time to support INTL, both volunteering his time and supporting the Endowment – a commitment that stands out amongst our young alumni.
Matthew says,”I think the reason I have stayed involved at INTL is that it was such a formative experience for me. I spent 11 years here, from 1995 to 2006, and that 11 year stretch of my life was the single longest amount of time I spent at any educational institution. The friends I made here are still people who are part of my life, so that is why I have always wanted to remain involved. If I think back to how important those early years are, there is no way I can take that for granted, and no way that I can’t want to help create that experience here for a new generation of students.”
Through his service to the State Department and the U.N. Matthew came to recognize more than ever the importance of an international education. “I think INTL's ambition to strive to create a better and more peaceful world is an incredibly noble one. If you assume that the leaders of tomorrow are the students of today, then it really makes sense to instill those values in children early on...Now more than ever it is so important to focus on understanding and mutual respect.”
It is so gratifying to see our alumni not only learn the lessons of an international, bilingual education, but also to see them feel empowered to live out these values in such a phenomenal way.
We are delighted and incredibly proud to recognize Matthew Colford as this year’s Alumni Rising Star. We can’t wait to see where your journey takes you next.

Watch the video about Matthew.
Back